Justyna Stoszek (b. 1974, Kraków), an interdisciplinary artist, has been involved in artistic activity and social activism for nearly two decades, conducting workshops and initiating and supporting social campaigns. Her activities are focused on broadly defined ecological education, the relationship between man and nature, and protection of the natural environment. Her artistic education began at the Visual Arts Lyceum in Rzeszów. In 1999 she graduated from the Academy of Fine Arts in Kraków with a degree in painting. In 2014 she enrolled in the Pablo Picasso Experimental Lithography Workshop in Warsaw.

Her early work was a precursor to plant installations in glass cases: since 2007 she has been creating miniature forests planted in glass containers - FOREST FOREVER. Since 2017 she has worked on a series of exhibitions called BiosferaOsobista (PersonalBiosphere), aiming to propagate knowledge and awareness relating to the functioning of the natural environment and the relationship between man and nature, as well as reflection on the human impact on nature. The first stage involved exhibiting glass-encased forests in natural surroundings,in the woods. To do that, the artist created her own organic varietyof glass, encapsulating plant biospheres.

The show openings were held in natural surroundings, e.g. in the primeval forest Puszcz Białowieska and in the forests in the Beskid Mountains and the Masurian Lake District.

The artist's most recent project has been Earth Hour, a nationwide exhibition in urban spaces, held in collaboration with AMS, an outdoor ad company. The images displayed on large-size billboards (also in an animated version), lightboxes and advertising columns can be viewed in many Polish cities to this day.

Justyna Stoszek has received a Culture Online grant from the Minister of Culture and National Heritage.

2020 - 2021 – art project “Hope” as a response to the COVID-19 pandemic displayed on large-size billboards, lightboxes and advertising columns in collaboration with AMS.

2021 - Art Book. Interactive multi-media project allowing audience to interact during the creation process. The topic of the book is the creative process, the relationship between humans and nature, myths, symbolism of animals and plants. The art book is a collection of artworks created by the artist, which allows for their own narrative making it an individual art piece. This project received a Culture Online grant from the Minister of Culture and National Heritage.

2019 - 2022 - “Earth Hour”, a nationwide exhibition in urban spaces. Artwork “Heart/Tree” displayed on large-size billboards (also in an animated version), lightboxes and advertising columns, which can be viewed in many Polish cities to this day. In collaboration with AMS.

2018 - Design and realisation of statuettes - living sculptures - awards in the "Innovation 2018" competition.

2017 - 2018 - series of exhibitions called BiosferaOsobista (PersonalBiosphere). Exposition of artworks consisting of Justyna’s designer glass made exclusively for BiospheraOsobista in their natural, forest environment. First exhibition series of exhibition were presented at Bialowieza Forest. The next part of the glass capsule journey was Beskidzki Forest and after that Mazurski Forest.The crowning element of the forestal journeys were installations in an urban environment:

2016 – 2018 – “Forest Forever” - series of artistic and educational workshops developing greater understanding of the ecology and exploring the relationship between humans and nature. Workshops focused on reflecting on the human impact on the environment. 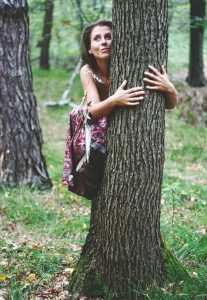 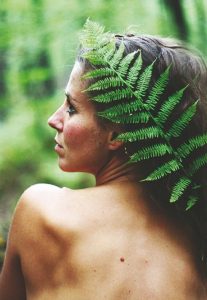 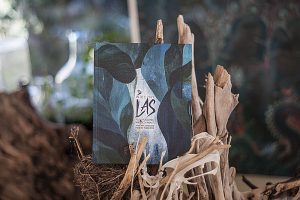